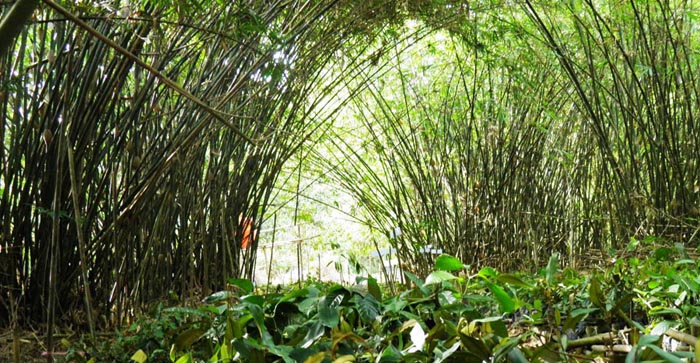 Bamboo is a group of potential non-timber forest products (HHBK) to replace wood. The success of bamboo replacing wood in wood-based industries can be seen from several products on the market, such as chopsticks, tooth sticks, particleboard, ply bamboo (bamboo layers) and matchsticks.

Bamboo is a plant that has long been used and cultivated by rural communities. It is known that there are 162 types of bamboo in Indonesia, 88 of which are endemic to Indonesia and 124 are native to Indonesia.

Hutan Harapan is an ecosystem restoration area of 98,555 hectares in the provinces of Jambi and South Sumatra. This area is inhabited by more than 307 species of birds, 64 species of mammals, 65 species of fish, 52 species of amphibians, 71 species of reptiles, and 728 species of trees. Some of this flora and fauna are not found in other forests in Indonesia and even in the world. Some are already very rare and endangered, such as Sumatran tigers, Asian elephants, sun bears, ungko, storm storks, hornbills, jelutong, bulian, Tembesu, and keruing.

One of the many plant species found in Hutan Harapan is bamboo. After the 2015 forest fires and entering the 2016 rainy season, bamboo is growing rapidly. These bamboos are indeed invasive plants that can disturb other plants. But, on the other hand, some benefits can be utilized in these plants. Moreover, the bamboo population in Hutan Harapan is also fairly large, invading thousands of hectares of land.

In February 2016, Hutan Harapan management collaborated with the Botany Research team from the Indonesian Institute of Sciences Biology Research Center (LIPI) to study the potential of bamboo in Harapan Forest. The researchers were in the Hutan Harapan for several days. They are Elizabeth A Widjaja and I Putu Gede Parlida Damayanto.

One of the researchers’ interesting findings is the bamboo species that produce biga (crystals), which in China have been used for medicines for certain diseases, such as impotence. This bamboo (Gigantochloa scortechinii) was found in Merajang, an area in Hutan Harapan, Musi Banyuasin region, South Sumatra. Biga is a by-product of a non-timber forest product (HHBK) and is an export material.

According to these researchers, Schizostachyum zollingeri bamboo grows along the main road in Lumajang, East Java, and is used for tobacco drying. In the area of Hutan Harapan, the clumps are small so that biga cannot be searched. Biga can be obtained by burning.

Gigantochloa sp 1 which grows on the edge of the Black Bamboo River has the potential to be used because it has an upright stem of up to 25 meters. The trunk is rather thin because it can be processed into ply bamboo or bamboo layers by making pelupuh first or chopped.

Gigantochloa sp 2 which grows in Simpang Koni and Bato is a type that has an upright stem. Gigantochloa robusta, which grows a lot on the riverbank in Bato, has large stems up to 12 cm in diameter producing sweet shoots. This bamboo can be used for bamboo shoot production.

How to propagate bamboo in Hutan Harapan can be brought by young bamboo-eating animals – like elephants chewing bamboo so that their mouths bleed to get minerals – and because of the dropping of branches and shoots to the ground until it roots and grows. The bamboo area is usually a home range or home area of tiger, tapir, and bear.

Elizabeth and Putu Gede Parlida explained that bamboo in Hutan Harapan can be used as biomass material for electrical gasification. In another type in India, for a biomass power project, 80 hectares of bamboo can produce 1 MW. Also, 4 kg of bamboo biomass can produce 1-1.2 liters of ethanol which can be used as a raw material for a car engine. Bamboo also absorbs CO2 as much as 149.9 tons/ha.

In Bali, tabah bamboo (Gigantochloa nigrociliata) aged 3 years can produce 3 tons of bamboo shoots per year. The number of clean shoots produced by Gigantochloa robusta is more because the shoots are bigger. In the rainy season, the harvest is done every two days.

All Gigantochloa can be used for wicker material and furniture, such as tables, chairs, and cabinets. All bamboo can be used to resist soil erosion because the roots of the fibers that are intertwined are very strongly intertwined. Bamboo is also the best water storage. In Colombia, Guadua bamboo forest storing 30,000 liters/ha of water in its trunk will be returned to the ground during the dry season.

Bamboo plants can also be used for water purification because bamboo roots contain micro-organisms that can clean biochemical polluted water, which is oxidized by bacteria. Bamboo will produce oxygen that is easily dissolved and can convert oxygen into the air through leaves, stems, and roots.

The two researchers suggest that Hutan Harapan management conducts physical, mechanical and chemical properties so that it can be confirmed which bamboo is good for producing bamboo shoots and which is good for biomass power plants or biofuels. Complete research will be very useful for biofuels.