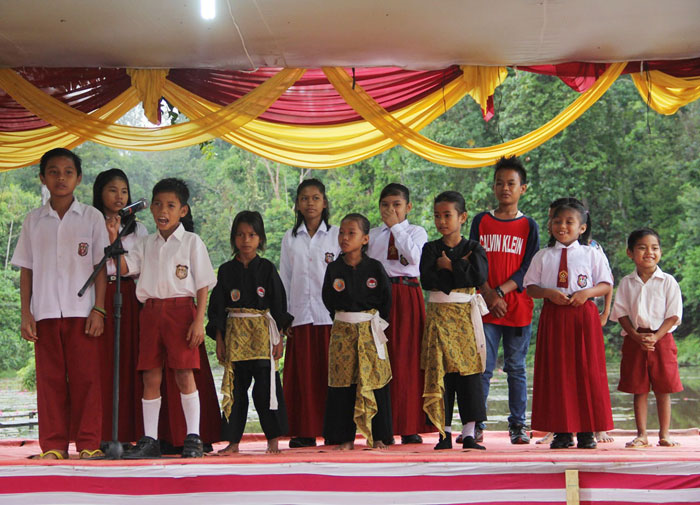 The song by the legendary singer Gombloh resounded on the outskirts of Lake Harapan, one fresh morning in the front of the Minister of Environment and Forestry (LHK) Siti Nurbaya and the Danish Ambassador to Indonesia Casper Klynge who sat in the ranks of other important guests. The song was sung by Batin Sembilan children, a tribe in the interior of the Hutan Harapan, without musical accompaniment. They are students of the “Besamo School”, a school facilitated by the Hutan Harapan management for children who are far from a touch of development and formal education.

On Wednesday morning, September 28, 2016, Siti Nurbaya and Casper Klynge visited the Hutan Harapan to mark the Danish government’s support for the restoration of the HPH company’s former logging forest program. Hearing the touching song, Minister Siti accompanied by other guests applauded, following the rhythm of the children’s singing. The atmosphere becomes solemn and gives a deep impression.

Then the chorus is sung:

That’s when it crossed my mind how human awareness of nature conservation is now increasingly distant. Imagine every day there are groups of people who want to encroach and control state forest land such as Hutan Harapan without permission and then turned into oil palm plantations. Trees are falling, animals are endangered. They burn the forest to open a garden. It is in this context that the support of the Minister of Environment and Forestry and the Danish government to Hutan Harapan, whose concession permit was granted to PT Indonesian Ecosystem Restoration (PT REKI), is very important.