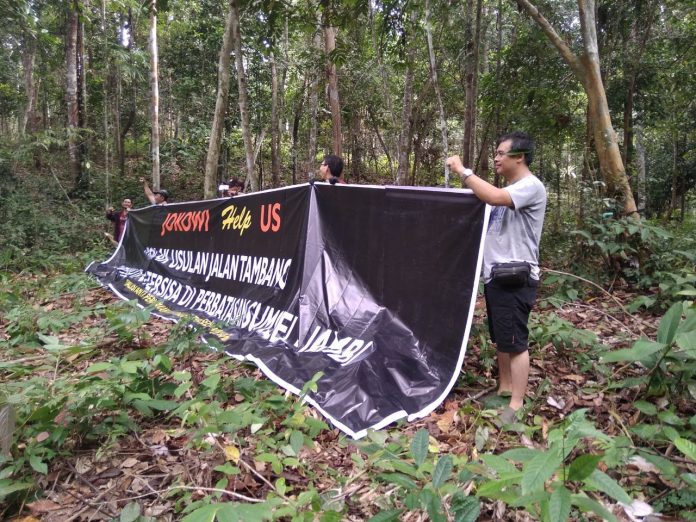 One of the banners used during the protest was emblazoned with the words “Jokowi, help us. Reject the proposal of mining road traversing the remaining forest area on South Sumatra-Jambi borders”.(The Jakarta Post/Jon Afrizal)

Activists from a coalition of 36 civil society group have protested a proposal to build a 31.8-kilometer-long mining road that they say will damage the ecosystem in the forestry area of jambi and South Sumatera, asking President Joko “Jokowi” Widodo’s support to halt the plan.

The road was proposed by coal mining company PT Marga Bara Jaya and the permit was being processed at the Environment and Forestry Ministry, according to members of the coalition.

Members of the NGOs based in the tow provinces held a protest over the plan on Saturday, unfurling banners in the location of which the road was set to be constructed in Batanghari Leko subdistrict, Musi Banyuasin regency, South Sumatera.

One of the banners used during the protest was emblazoned with the words “Jokowi, help us. Reject the proposal for a mining road traversing the remaining forest area in South Sumatra-Jambi borders”.

Jambi People’s Justice Foundation (YKR) director Musri Nauli said the activists rejected the plan to build the road since it would affect the forest landscape along the Kapas and Meranti rivers in South Sumatra, as well as the Kandang River and upstream area of the Lasian River in Jambi.

“The areas cover the remaining lowland forests in Sumatra, so if a mining road is built in [the area], it will disturb the ecosystem,” Musri said.

The construction of the road was first proposed by the mining company in 2013 to transfer coal from the mining location in Musi Rawas regency in South Sumatra to the company’s stockpile in Pulang Gading village on the banks of the Bayung Lencir River in the same province.

The proposed mining road would stretch along 22.2 kilometers in South Sumatra and 9.66 km in Jambi, Musri said.

Environmentalist Adiosyafri from Our Forest Institute (HaKI) of South Sumatera concurred with Musri, saying that construction of the road would involve the clearing of some forest areas, which would lead to forest fragmentation and deforestation as well as cause the loss of biodiversity.

“There are 307 species of birds, 64 types of mammals and 1,300 species of plants in the lowland forest area. Of the mammals, 66 are on the brink of extinction, including 29 Sumatran tigers and six Sumatran elephants,” Adiosyafri said.

He added that the road would open access to forest encroachers, threatening the lives of indigenous tribes living in the area, comprising at least 220 households grouped in the Batin Sembilan tribe, also known as Suku Anak Dalam.

Three groups belonging to the Batin Sembilan tribe previously rejected the road proposal, arguing that the opening of the forest area would threatened their livelihoods and have a negative impact on their home.

Bi Teguh, the tribespeople’s spokesperson who is called “the woman of the forests”, also conveyed the rejection to Jokowi, who visited Jambi city in December for a ceremony to handover a government decree on forest partnership recognition and protection to the groups in the Pine forests.

Jokowi’s response to the tribes’ rejection was unclear as the President himself had yet to comment on the issue.

Meanwhile, Brahim, a local of Sako Suban village, claimed that some areas in the forests had been cleared and that the coverage of the opening reached hundreds of hectares.

He went on to say that people from the mining company had told them that local residents could also use the road when construction had finished.

However, Musri denied Brahim’s claim, saying that the road would be exclusively used for mining purposes, meaning that no locals could use the road.

Solikhin, another villager, said locals had received a “warning” from nature — which he suspected as the result of the opening of forest area to construction — as they found datuk belang (tigers) and bears repeatedly going in and out the village in recent weeks.

In local belief, a tiger appearance in the village meant that humans had conducted a misdeed in the area.

“There is a fear spreading among us as villagers living on the outskirts of the forest,” Solikhin said, “If these animals have started to appear, it means a severe warning for us.” (tru/afr) 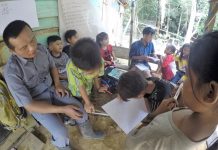