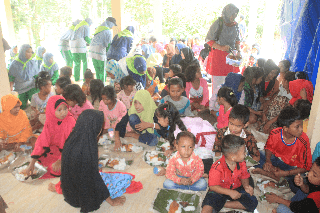 After introductions, the students went straight to Meranjat’s house, where the joint learning activities were held. “If the Governor of Jambi and even the President of the Republic of Indonesia saw firsthand the Batin Sembilan children learning, they would be proud and happy,” said Dwi, one of the Al Azhar Jambi students.

The Jambi students did not expect that the Batin Sembilan children could already ready and write, even though there were some difficulties. “Spelling and counting can be done but they have to study regularly,” said Ari, an Al Azhar Jambi School teacher.

Many of the Batin Sembilan Indigenous Peoples still live a nomadic or semi-nomadic lifestyle which is often not conducive to learning in a formal school setting. Recognizing these constraints, the Education Director of Diniyyah Al Azhar Jambi University, Muhammad Hafiz El Yusuf expressed his appreciation for the hard work of the Besamo school teachers and Hutan Harapan management to provide an education forBatin Sembilan children.

In addition to joint learning, the students also provided social assistance, such as food, clothing, religious and school equipment to the Batin Sembilan and Besamo School students.

The students also showed their support for the Hutan Harapan ecosystem restoration activities by rejecting encroachment and forest fires. (AWI) 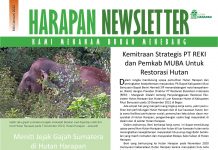 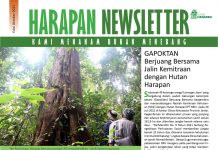 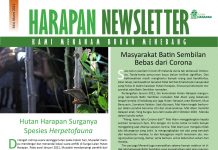